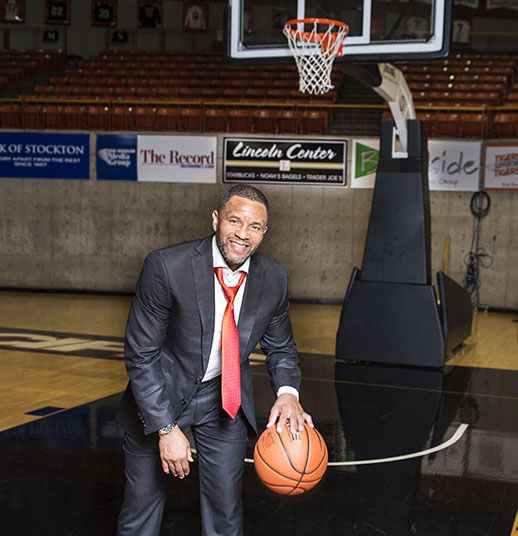 Being able to live in a college town and attend D-1 tier athletic match-ups is something to relish. University of the Pacific, with its beautiful tree-lined campus and stellar facilities, is a Stockton treasure. Fans can choose from a variety of competitive sporting events to attend throughout the year, and there is something extra special that is shared by a community when rooting for the “home team.”

Pacific’s teams compete in NCAA Division-I athletic’s and since 2013 have been member institutions of the West Coast Conference (which includes 10 private, faith-based universities similar to Pacific). The athletics department sponsors 18 sports teams — with the Orange and Black competing in the WCC, Mountain Pacific Sports Federation, NorPac Conference and America East Conference.

Athletics at Pacific have changed over the years but the traditions have not. The university is proud of its strong ties to Stockton and commitment to building quality sports programs. Pacific continues to increase support of those teams — something all colleges have had to do to remain competitive.

Having world-class facilities empowers collegiate athletic programs to recruit and train the best and brightest student-athletes and provides a great fan experience. And Pacific is no different. Tiger fans can watch their favorite sport in some of the finest surroundings on the West Coast — whether it is at the Klein Family Field (baseball), Pacific Field Hockey Turf, Raney Sand Volleyball Courts or the recently completed Eve Zimmerman Tennis Facility. Soccer also has a new field on the horizon, and the Janssen-Lagorio Gymnasium received state-of-the-art upgrades last Spring.

The support and commitment extends to the hiring and retaining of the very best coaches — as evident with the entrance of Damon Stoudamire. Tiger fans were thrilled when Stoudamire accepted the Men’s Basketball head coaching position in March of 2016.

Stoudamire was arguably the biggest coaching “get” in Tiger history. He’s a stud. His NBA stardom and charisma make him a huge draw for fans. In just one season, he already achieved what no other Tiger men’s basketball coach had done before — register their first ever WCC tournament victory.

Now entering his second season at UOP he is liking it — liking it a lot — and is highly anticipating the upcoming season.

“Last year was definitely a transition year for me to get on solid ground, and this season I have a much clearer understanding and direction for my team,” Stoudamire says. “My players left everything on the court for me. What I look forward to the most is developing them as players and young men, and having a winning season.”

Stoudamire appreciates the community in which he landed. He says it reminds him of growing up in Portland, and that he has felt welcome from day one.

“This environment is great. Both Pacific and the surrounding community have embraced me with open arms. Everyone here works hand in hand and is very supportive — from every direction of the campus.”

Pacific has a rich 88-year history in Stockton. It is the second largest employer in San Joaquin County. In addition to those economic benefits, local businesses reap commerce generated by visiting teams and fans. Tiger fans frequenting Lincoln Center will often see entire opposing teams, coaches and fans — sporting rival gear — hanging out or dining at their favorite restaurants. The Center even has a special liaison to help coordinate with teams.

The camaraderie and partnership that is shared amongst the athletic teams, and the way it extends into the Stockton community and beyond, is one of the reasons Stoudamire chose Pacific – and also why Women’s Basketball Head Coach Bradley Davis loves it here.

The recently hired Men’s Baseball Head Coach Ryan Garko agrees. He chose Pacific because he appreciates the entire vision of the university.

“I feel strongly about the academic and athletic mission here at Pacific. We are offering student athletes that want to excel both on and off the field the opportunity to come to Stockton and find the highest level of support from our faculty, staff and coaches.”

Garko also sees a program steeped in tradition that he can build on.

“In this first season I am most looking forward to implementing our process and establishing a standard of performance that the Pacific baseball program will be known for moving forward. On game night, I expect to compete on every pitch of every game, and win or lose, make the opponent earn everything on the field.”

Click here to view the chronicle online and read all of the Pacific coaches profiles.