There’s a lot happening in Lodi wine country where 85 wineries are putting Lodi’s labels on tables around the world. With 110,000 acres of wine grapes, it’s no wonder the region is gaining looks. “It’s a very exciting time,” Bob Highfill, of the Lodi Winegrape Commission, said. “Lodi is getting more recognition as a world class wine region. People enjoy that discovery of something that is new to them, even though Lodi has been growing wine grapes since the mid-18th century.” While the area has cemented a rep for old vine zins, Lodi grows about 100 varieties of wine grapes and now leads the state in the production of cabernet sauvignon. Most of Lodi’s wineries are now hosting tasting rooms where wine lovers are seeing firsthand how the next generation in Lodi’s long legacy with the vine are making their mark on new wines. 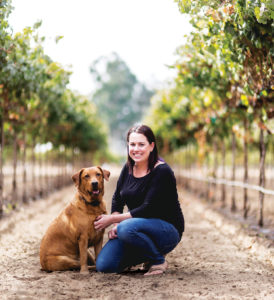 Melissa Phillips Stroud is the sixth generation to be involved in the family’s business since it started over 150 years ago. Known worldwide for its 7 Deadly Zins, the winery is also a destination for visitors. While she’s responsible for a team overlooking sales, distribution, marketing programming and more, this mom of three is also making sure that the direct to consumer experience at Michael David Winery creates loyalty. “We have a new outdoor bistro and pizza oven,” she said. “We have our Comedy Night Series that sells out every time. We just did our first Family Night, which is free. We are doing monthly music nights, as well.” It all adds up to a sense of community that is attracting people from near and far to enjoy Michael David’s award-winning wines, nosh on good food and make new friends. 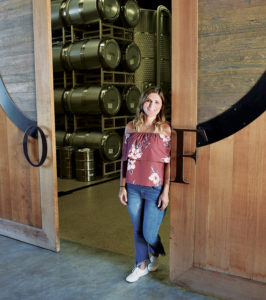 Sierra Zeiter grew up in a family of eye doctors but she’s had her eye on winemaking and found a home at Oak Farm Vineyards where she is writing implement procedures, conducting lab work, selecting barrels and getting her hands dirty as needed.  “I love Oak Farms and the opportunity they gave me. It’s small enough that I can have a say in the winemaking process,” the 23-year-old Cal Poly grad said. Zeiter said she knows what her peers like and Lodi is definitely winning over her generation with wines that are lighter in style and more elegant. Her favorite? The Oak Farm Vineyards Grenache. 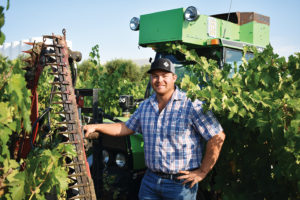 Hadyn Schatz, 25, is proud to be contributing to the family business, which started in the early 1950s. His dad taught him the ropes and after earning his degree at Cal Poly in Ag Systems Management, he is making his mark. “I’m able to alleviate my dad’s time in the field and allow him to focus more on the winery,” he said. “Right now, we are farming about 1,000 acres with 14 different varieties. We’ve done a lot of redeveloping since I came home, ripping out old grapes and putting in new ones.” Peltier crushed 11,000 tons of wine grapes last year and features a cutting-edge winery, tasting room, and custom crush facility. 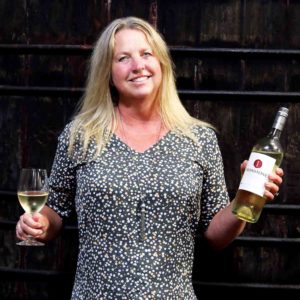 Joan Kautz has visited 45-plus countries as director of global sales and marketing for the Kautz family’s Ironstone Vineyards. Today, the winery exports to 50 nations. Kautz, who majored in ag business and foreign policy at Cal Poly, said introducing wine from a lesser known wine-producing region was tough in the beginning but now exports make up 40 percent of Ironstone’s sakes. “It used to be if you live in Bordeaux, you didn’t drink Burgundy,” she said. “But now with the millennials and the Internet, everything is so much more international.” Ironstone’s two top-selling wines are Obsession Symphony and Ironstone Zinfandel. “Seeing our wine on a menu in another country is an awesome feeling,” she said. 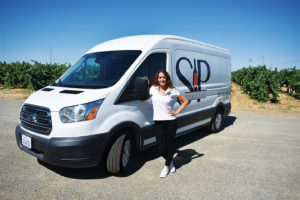 To visit Lodi’s 60-plus tasting rooms, you’ll need a ride. Taylor Kininmonth can get you there. The 28-year-old Sac State graduate was named Visit Lodi!’s tourism advocate of the year recently and started her wine tour gig in 2015 when Lodi had just been named Wine Region of the Year by Wine Enthusiast Magazine. “It was good timing and there was really a need,” she said. “Our generation loves the group experience, so on our tours, you book your seat like on an airplane.” Private shuttles are also available. The tour includes a driver and guide, stopping at four wineries. Tours are now offered seven days a week. Next up, Kininmonth plans a Vine to Wine promotion that includes a barrel tasting with a winemaker plus a food and wine pairing dinner.

Thirsty? Visit many of our restaurants for a glass (or bottle!) of local wine.